12.000 One Green Sandpiper on the scrape in the cattlefield at the Lurgies
Top

Also had a Little Gull at Lunan bay earlier.
Top

Juvenile Black Tern on Rossie Spit from the sailing club road at 1847 on Thursday evening. Terns continually appeared to be flushed and it was lost to view. Large numbers of Redshank, Oystercatchers, Knot and Black-tailed Godwits.

After asking around, there is doubt regarding this gull, it might be a Leucistic Herring Gull? Elsewhere photos show similar birds as Kumliens but time of year seems wrong. Hopefully it will remain and be confirmed. I'll post more photos if they show relevant features. 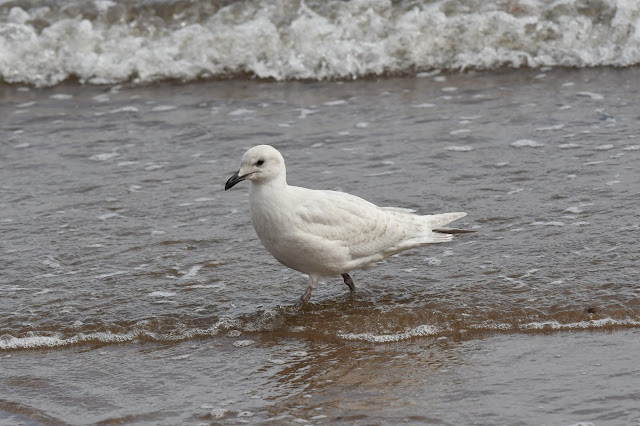 The "Iceland Gull" has been ID'd as "reported 1st-summer is an aberrant Herring Gull" on Birdguides. I had posted photos in the hope of a definitive answer, although it may have been seen firsthand. This ID was suggested by a wise old sage whom I won't name until I've spoken to them. I seem to attract these leucistic individuals, recalling a tree sparrow in my garden last year.
Top

Drake Surf Scoter with around 100 Velvet Scoter this afternoon at Lunan Bay, from public platform on north beach.

Could that have been a Rough legged buzzard circling over Montreathmont forest this afternoon? Call reminded of a buzzard, but just not right! Definite white under tail with dark edged tip. seemed too big for common buzzard and so considered white tailed eagle, but not convinced especially when reading of their call sounds. Any thoughts?
Top

also c.200 Canada Geese arrived in to join the 10 which have been there for a month.
Top

Very enjoyable day on Barry Buddon; Highlights included 2 Short-eared Owls, Wheatear, Greenshank, Sparrowhawk, Bullfinch , Tufted Duck with young and a good selection of seabirds seen too.
Also good to be shown plants such as Adders Tongue & Betany by the experts !
Big thanks to the Leaders involved; Graeme Smith, Jim Cook and Bob McCurley and also to Anne Reid & David Lampard for the excellent Moths they had on display.
Top

Tuesday 21st August : Morning outing produced a Whimbrel at Boddin, Lunan. Moving inland to Balgavies Loch, there was a Barnacle Goose on the water and a female Redstart near the hide. Yesterday I saw a heartwarming sight of two Grey Partridge with 10 youngsters near Aldbar, Brechin
Top

Hello, I'm seeing lots of Canada Geese flying to and from the basin near the lurgies while at work today.

I'd also like to add my thanks to those involved organising the Barry Buddon open day and to those who welcomed me as a 'newbie' to the group. It was a great day out especially getting the Short eared Owls near the lighthouse.

Great session at the Lurgies with my faither this morning, highlights (for me)

1 Egret - we think it was a Great Egret, but someone better than us needs to check it out!

The probable Hobby reported earlier will have to remain so, it was the size of a male Sparrowhawk with white cheeks, dark moustache, pointed wings and a blurry photo appeared to show an orange/red rump. It appeared and disappeared to quickly after flushing all of the Starlings and Wagtails on the beach. Very few waders there today but the slack tide meant many were sitting on the rocks even at high tide.

The Egret at the Lurgies is a Little Egret (photographed) and there was a Green Sandpiper on the scrape at the top of the Lurgies. At least one Kingfisher has returned, still some Black-tailed Godwits and Greenshanks.
Top

Users browsing this forum: No registered users and 0 guests