As well as above rosefinch message these went out on AGV...
(feel free to post additional details if you observed any of the below)

AGV A highly probable (trying to get better views) Icterine Warbler at Usan "reservoir" but has moved into trees on private property next door. Simon Busuttil

Re the AGV report of this. I never did get better views as the bird moved into a fully leafed tree from the just budding one I saw it briefly (and from underneath) in. May have to go down as "one that got away". I took notes but there's no doubt that the bird I saw had long pink legs which goes against it being an Icterine warbler. Need to look at some literature
Top

Mon. 20th May
2pm Half hour search for poss. Icterine at Usan- saw nothing unusual
3pm Male Red-Backed Shrike still present around Ethie Mains pools, no sign of Black Redstart,Raven was a surprise, singing Corn Bunting was a bonus
4pm Scarlet Rosefinch still singing in Auchmithie churchyard and coming down ? to feeders in nearby gardens.
Top

keptie pond
1 sparrowhawk/1 pair of coots with 2 chicks,another coot sitting on a nest with 2 chicks heads showing/moorhens/heron/mallards/jackdaws/1 tufted duck/mutes,i saw the empty mute swan nest hope somebody gets prosecuted for this

Popped down to Auchmithie first, missed the rosefinch (but it is still there apparently). Did see several whitethroats, yellowhammers, wren, house martins, fulmars on the cliffs, possibly a few puffins distantly sleeping on the sea and a distant diver.

Then, off to Forfar Loch for a picninc lunch. Lots of nesting great crested grebes and coots. Whilst scanning to try and find the ring necked duck, my wife spotted a different looking 'duck' in the distance near the viewing platform. So, we headed round and discovered it was a male garganey! Then we spotted the ring necked duck. Had a mallard swim by with 10 ducklings and a sedge warbler singing close by. Plenty of Tufted ducks, greylag geese, lesser black backed gulls and goosander around too.

Then off to Kinnordy loch. Osprey fishing, male marsh harrier flew around, black headed gulls, lapwing, oystercatchers and redshank on the bogbean. Had a grey heron stalking the bogbean furthest from the gullery hide.

Garganey (male) was in front of the viewing platform then moved down into the area of reeds and willow scrub and hid in there.

Ring Necked Duck (female) was with a small group of Tufted Ducks and was keeping close to one male in particular.

Common Sandpiper - one was at the yacht club
Top

21/05/2013 0700 Auchmithie Rose Finch showing well in first Syc. tree in church yard. Lifer for me. Ethie Mains no sign of Shrikes must be roosting. Elliot Female Mallard with 4 ducklings. Gooseander on fen pond, 2 Mutes,pair Tufties and 6 Male Mallards also there, plenty Sedge still awaiting the Grasshopper Warb which was here about this time last year.
Top

6 gannets flying around and feeding, a long tailed duck near one of the fishing nets, a group of sandwich and common terns (~30 of each) and 1 little tern hiding amongst them. 6 oystercatchers, a few razorbills on the sea, herring gulls and not a lot else.
Top

No sight or sound of rosefinch in 1 hour search of usual Auchmithie locations this morning 7:00-8:00am.
Stark contrast to how easily seen early on monday morning when it was easily heard then seen.
Arctic skua in Auchmithie bay briefly and common seal.

Heres a record shot from Monday 20th May of the Auchmithie Rosefinch found by Stuart Green. 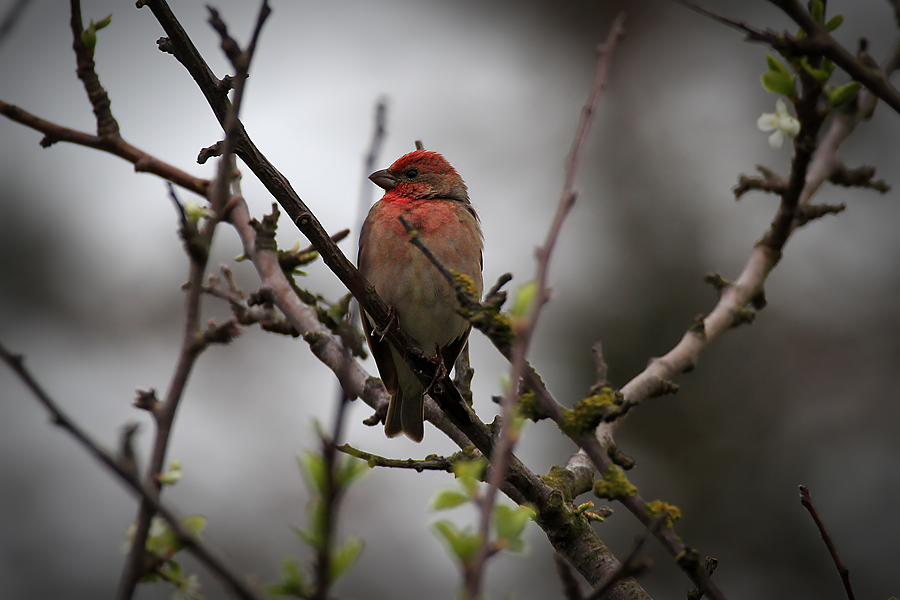 On Sunday 19th May, I visited Kinnordy Loch late morning. We saw sedge warblers, whitethroat, willow warbler and I heard one blackcap. There were a few coal tits and one jay near the feeders. There was a reed bunting outside the hide at the eastern end of the loch.
On the loch we spotted two widgeon and some shellduck. A few redshanks were flying around.

Went up a small glen in the afternoon with my parents. The weather turned out to be glorious, warm and sunny. There is no road access into this glen so we parked at the bottom and walked up through some pasture with lots of sheep. A cuckoo, goldcrest, willow warblers and a coal tit were calling from the trees as we set out. We watched two buzzards and, in the distance, a large group of red deer were on top of one of the hills.
We stopped a while, and listened to some black grouse calling in the distance, but couldn’t locate them. There were red grouse here too, and lots of meadow pipits. We continued up the glen, and, as we left the fields behind, we found several wheatears and a whinchat. Some snipe were calling, and there were curlews, oystercatchers and lapwing. A common sandpiper was on the river. A second large group of deer were on another hillside.
Walking back down the glen, I saw two mistle thrush chase off a sparrowhawk. We watched a cuckoo perch on the power lines, and a skylark called overhead.

On Monday amorning, I drove up to the backwater dam, but the mist was heavy and so didn’t see that much. I found quite a few red grouse; some were on the road. There was also a whinchat. Two common sandpipers were flying up and down the lochside. There were lots of common gull on the dam railings. I managed to get a great picture of an oystercatcher from the car. There were a few house martins at Kingoldrum. At Kinnordy Loch, the male marsh harrier was hunting over the reed beds. There were coal tits, willow warbler, reed bunting, sedge warbler and whitethroat all singing. A jay was at the bird feeders. Above the loch there were many swifts, swallows and sand martins. The red squirrels were chasing one another.

We walked the road from Cortachy to Pearsie later on Monday morning. We found black cap, willow warbler and whitethroat. There were several yellowhammers, siskin, and lesser redpolls. A coal tit called from some conifers along with a few goldcrest. A few skylarks were singing on the wing. A buzzard was hunting over the farmland. At Pearsie, there was a greater spotted woodpecker. A grey heron flew over.
Top

22/05/2013 Near Seven Arches on the Dighty, 1 Spotted Flycatcher singing and fly-catching.
Craigmill Burn at Batties Den, Muirdrum. 1 pair of Dippers feeding large young in nest on top of Bat-box ( Bats chittering inside!) and 2 pairs of Grey Wagtails with newly fledged young. Saw no sign of healthy fish in the burn but found about 10 dying fingerling trout. Lack of oxygen or pollution? Reported to SEPA.
Top

As the Elliot Arctic Skua flew over 22 photos were taken. Here is a composite image of 9 of those photos... 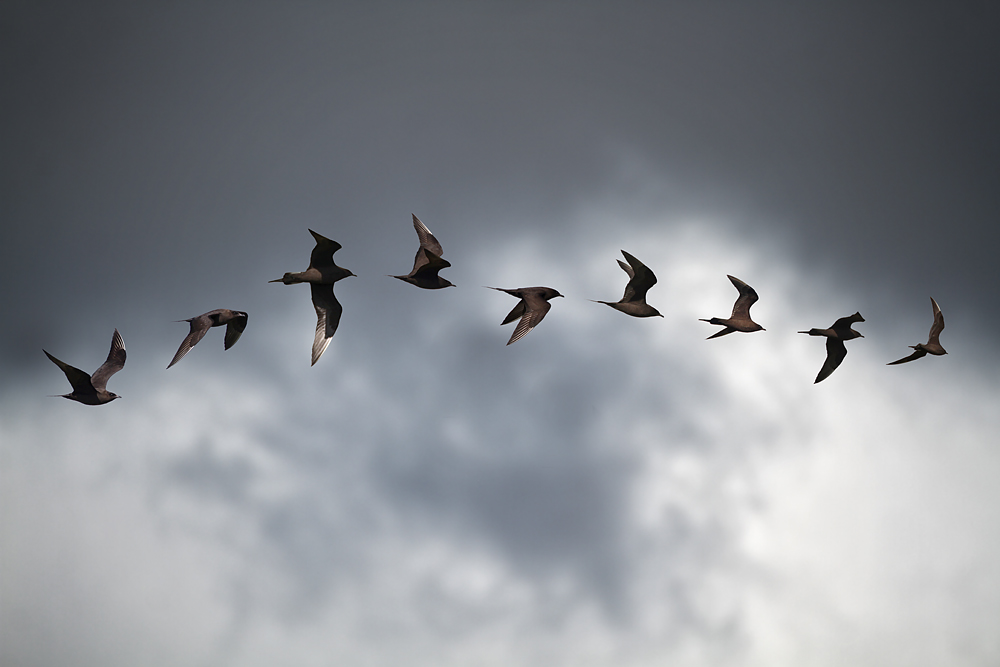 Immensely frustrating day as I had to work ! However managed one hr seawatch 1710 to 1810 this evening at Usan. 1050 kittiwakes, 2 Arctic, 1 Great and 1 Pomarine skua north with 16 manxies, 190 fulmars and a supportng cast of gannets and terns. could have been worse......
Top

Couldn't find the Ring-necked Duck today at Forfar Loch today, I did on Thursday, but it could have been one of the many ducks sleeping in the bright sun.
2 Common Sandpiper were on the spit and Great Crested Grebes were displaying.
Top

Nearly spat me tea out - Hobby low west over Maryton, Kirriemuir tonight whilst sat in the garden having fish n chips with the kids. Bird came in from east low over fields along the south side of the village, and carried on west, only 20-30 metres up, didn't linger or pay attention to any of the hirundines hawking there and carried on west. Bonus. SRG
Top

8.30am ring-necked parakeet eating apples in my garden, all birds suddenly took off and it has not been back

Also eating apples daily - pair of blackcaps, regular visits from pair of bullfinches, siskins, yellowhammers, pair gs woodpeckers,
and what I am pretty sure is a linnet.

Bluetit is sitting on 10 eggs in camera nestbox
Top

On way home after doing a Big Sit ADBC Fund Raiser at Lunan Bay where we recorded 42 species - Doris , Jon and I on way home popped in to see if the Spotted Flycatcher had returned to the Den . To our great delight we saw the Bird giving good views . Also present were DIPPER 1 WHITETHROAT 1 WILLOW WARBLER 1 plus usual suspects
Top

This morning the Cuckoo was calling almost continuously in the wood just south of the car park at Carrot Hill Viewpoint.
Top

This afternoon, first viewpoint (where the ring neck was) sitting on the spit. Russet brown wings, grey chest, white tag on leg.

Was roosting so couldn't ID - any ideas?

Seen by myself & Ian Graham.
Top

Keptie Breeding status: 3 Coots have 2 young each, 1 Coot has 1, 1 Moorhen has a chick, previously a larger chick was seen. 1 Sedge Warbler seen, 1 Willow Warbler and 3 unusual domestic ducks have turned up, 1 large white, a darker female and another light brown bird, 1 Wren singing in the scrub. The new Mute Swan pair have control of 75% of the pond and the original male has been confronting the new male but is smaller than him and always backs off. There were 23 Herring Gulls and 7 Lesser Black-backed Gulls today and no Mallard ducklings, probably predated as there were 2 on Tuesday.

Fowlsheugh: Tuesday 28th, Guillemots in the thousands, same for Kittiwakes with many still collecting nesting materials, Sedge Warblers, Pied Wagtails, Dunnock and Linnets in the gulley of the burn. No chicks were seen but a few had been reported in the hide log.
Top

Juvenile Redshank 3 at the flood pools to the west of the hide. Both Blackbird & Starling fledglings seen.
Top

Also a lesser whitethroat in the woods near the reservoir at the top of the road. Sung a couple of times but came under pressure to move on from a pr of whitethroats.....
Top

along with Herring Gulls, Lesser black backs, oysters, lapwing, 3 Shelduck and two redshank, there was another funny wader a bit smaller than a redshank. Just had my 'budget' bins with me so couldn't ID it right.

My garden in Whitehills, Forfar just now - second try at nesting for Woodpigeon (first nest was six feet from my front door so they flew away every time I opened it!) Blue tit young definitely in my nestbox. Newly fledged Blackbirds hiding in the shrubs (lots of cats aboot so I give them no chance!) Dunnock nesting in the ivy, and quite a few newly fledged House Spuggies at my bird table.